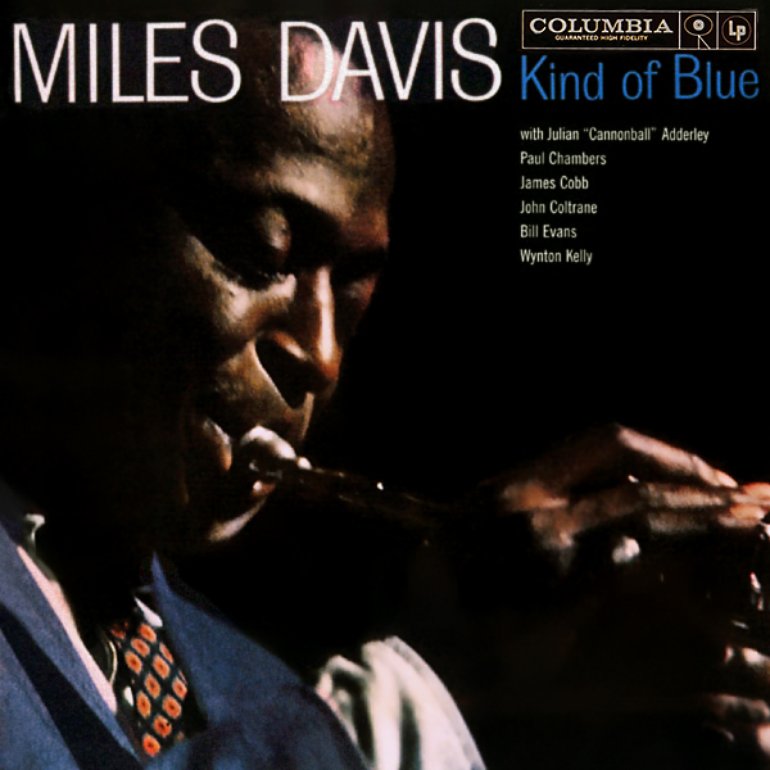 After last week’s catch up blog, today I return to my series of classic album reviews with the only instrumental disc in the collection; Miles Davis’ seminal jazz record, ‘Kind of Blue.’ I may be a lyricist but this record is so timeless, so significant; it certainly doesn’t need words to easily make its way into this series of my favourite 12 albums!

It’s not hyperbole to suggest that Miles Davis’ ‘Kind of Blue’ is regarded as one of the most important jazz records of all time and it’s certainly the first that captured my imagination over a decade ago. This led to many years enjoying and (still) trying to master the genre, all without a guitar in sight! Recorded live across two days in 1959 by a group of peerless young musicians who quickly went on to become jazz legends in their own right, this record makes a great entry point for anyone who is unsure how to approach or understand jazz. Here’s the album on Spotify: strap in!

Although Miles initially explored such ideas on his 1958 release ‘Milestones’, (and excuse the brief technicalities) ‘Kind of Blue’ is considered the beginning of the ‘modal jazz’ movement where conventional ‘hard-bop’ and its complex chord progressions were replaced with simple, scale-based structure. If that doesn’t make sense you won’t be alone but in simple terms, a whole new sub-genre of jazz was promoted by Miles and these musicians on ‘Kind of Blue’ where the music was slowed down, stripped back, and the player’s own imagination and sense of melody replacing harmonic complexity. “A return to melody” as Miles himself allegedly stated even more succinctly.

Perhaps the most famous example of this modal style is ‘So What’ (see above). Listen and you’ll hear that the majority of the song is based upon one scale (in this case, the Dorian mode) played over the top of one solitary chord by each of the soloists in Miles’ group. Each musician brings their own interpretation with John Coltrane’s solo (entering at 3:26) being a particular highlight and in stark contrast to Miles’ mellow solo which preceded it.

One of the things I really struggled to get my head around as a young guitarist first exploring this record was the fact that it was produced with almost no preparation. When I write a song, the vast majority of it is composed even if not always fully notated. Even guitar solos are sometimes planned and rehearsed. Yet ‘Kind of Blue’ is almost entirely improvised with only the basic melodies and riffs notated by Miles, followed by minimal direction during the sessions themselves. I remember it was during an informative late-night chat over 10 years ago with my good friend, talented jazzer and one-time Storey collaborator (see ‘First Light‘ above) Michael L. Roberts where I first understood just how spontaneous these classic solos and melodies were. And my mind was duly blown!

Nowhere is this extemporaneous creation better demonstrated than in my particular album favourite, ‘Flamenco Sketches’ (see Youtube link above, complete with notation). This composition doesn’t even have a ‘head’ (jazz-speak for a composed melody). Just a pre-defined series of five scales which each musician could explore for as long as they wished, before moving onto the next. The result of which is is over nine minutes of some of the most beautiful and soulful music I’ve ever heard; from within ANY genre. Pure unrestricted improvisation and true contemporary innovation.

‘Kind of Blue’ is always the first album I recommend when someone tells me they “don’t get jazz”. Looking beyond its ground-breaking influence to simply listen with a layman’s ear, the wonderful moods, melodies and textures create a truly relaxing, ambient backdrop to unwind and appreciate with closed eyes. But amongst his countless achievements, I believe Miles Davis’ greatest was being at the forefront of so many seismic changes of style within the jazz genre, across such a vast period of time. When most pop artists struggle to remain current for more than a couple of years, Miles truly was a pioneer and there is no better example of this in action, than ‘Kind of Blue’.