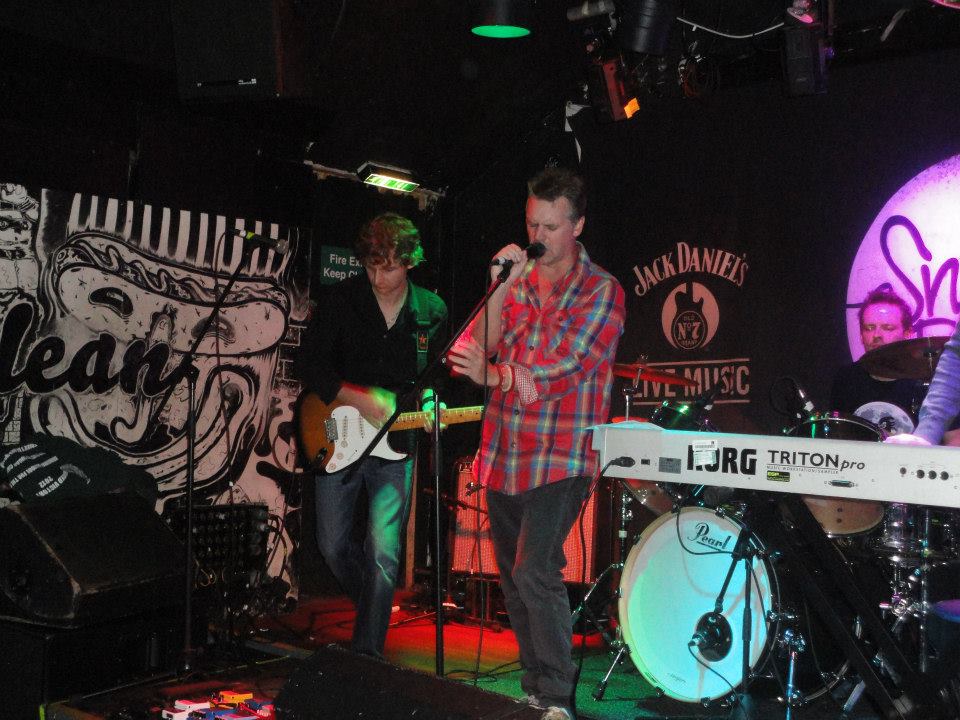 So I’m back to writing blogs of a non-Kenyan persuasion. Something I found extremely tricky before I flew out there! Thankfully since I got back I’ve been so busy, I’ve barely had time to feel sorry for myself about being back in the UK. Just as well, because I’d like to think that’s not my style anyway! After a couple of weeks which have involved a couple of gigs, plenty of guitar practice and two London rehearsals, I now find myself working in Edinburgh. The aforementioned rehearsals were with a Scottish band called ‘The Electric Sugar Children’ and they are currently undertaking a short tour in their native Scotland. Due to the unfortunate recent illness of their guitarist, they found me online and I’m now a last minute stand-in; this has involved learning their album at short notice, and then yesterday’s 4-5 hour train journey from London Kings Cross to Edinburgh for day 1.

The ‘Sugar Children‘ as I shall now refer to them – bassist Gordon (affectionately known as Gogs), vocalist Sandy (a.k.a. Jaf) and drummer Kenny (err… Kenny) – are all approximately 40 years old, and undertaking this tour for a number of reasons – the main ones being the launch of their new album, ‘Tumbleweed‘ and Gordon’s imminent emigration to New Zealand with his Kiwi fiancee. This tour is effectively Gog’s stag party! Thankfully they’re all good guys – friendly, funny and generous – and I enjoy their company, as well as playing their music. It could’ve been difficult jumping into a band where the other members have known each other for over 30 years, but there’s been no issues of ego or resentment of the ‘new guy’… yet! In fact quite the opposite – they’ve encouraged me to put forward my opinion, and politely considered it, even if not always agreed with it!

It’s no exaggeration to say Edinburgh is one of my favourite places in the world. The place just oozes with history and culture; it has the energy of a city, without losing it’s ‘small town’ beauty and charm. Old cobbled streets wind up and down the hills, lined with sandstone buildings that look like they’ve been there forever. I’d move there in a flash! Music is integral to Edinburgh life, and I love the fact that you can go into a small pub, to find a group of local musicians huddled in the corner, complete with fiddles, acoustic guitars, assorted percussion, and most importantly their voices.

They’ll sit there playing song after song (though expect traditional folk music rather than pop songs) while the locals chat and sip their ale – something else the Scots do very well indeed. For anyone who has not experienced it, it’s worth doing so just for the moment when someone stands up to deliver a solo vocal performance – no guitars, no piano – just their naked voice. All the punters stop talking and sit there respectfully, listening in silence. The first time it happened on my last trip, it gave me chills, and I remember thinking that however great London is, there is no way you’d get a pub full of people to sit there in silence for three minutes while someone sings an old celtic folk song. Shame.

To view the photographs which accompany this blog, please click HERE.

Last night there were no haunting solo vocal performances though. The ‘Sugar Children’ are part of a four band tour, featuring three Scottish bands, and an American three piece called ‘The Paranoid Style.’ Last night’s venue, ‘Sneaky Pete’s’ is mysterious, intimate and atmospheric. Although you could equally label it old, small and dark! Some people would say it has character, although the cynic in me would argue that after playing so many similar venues over the years, it’s a little dingy!

In all fairness though, it was quite a cool place to play, with free entry (I wish I could say the same for more London venues) and we had a decent stage sound at sound check. All four bands are energetic, and display different degrees of ‘rock’ throughout their sets, so I kept my ear plugs in all night so not to deafen myself! I enjoyed the night though, and look forward to this evening’s show in Dundee.

I won’t go into too much detail about the Sugar Children gig – I’ve already written enough for today. I will post some photographs on Facebook though, and link to those. Our set went well, and considering the six of us (the line-up has been augmented by two members of ‘The Paranoid Style’) played together for the first time at sound check, I think we held it together pretty well! Right… our coach is due any time, and we have gear to load in. Thanks for reading, and I’ll try post some more later, or tomorrow…. To finish here’s a little Storey clip which has been in my head today.

Take it easy.
A

To view the photographs which accompany this blog, please click HERE.