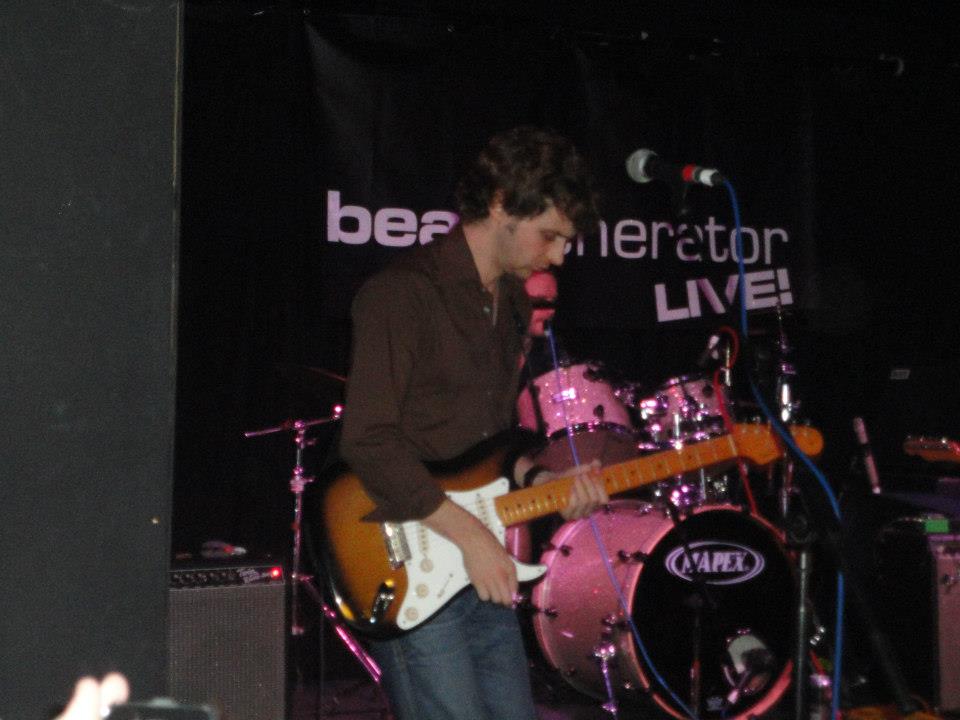 The Sugar Children do Dundee – Day 2

I started this blog in Dundee, while on a little down time Friday afternoon. We were waiting to get into the venue, and the guys from the Electric Sugar Children were a little tired and sore from Thursday night’s festivities, so had a wee snooze. I nipped down to hotel reception to pass the time with the blog.

There’s quite a large entourage here. As well as the four bands, there’s a photographer, a general assistant, and various friends who are helping out as roadies etc… It’s a nice vibe, as a lot of these people are old friends of the Sugar Children who may not have seen each other for a number of years, so Thursday night quickly turned into a bit of a party! I told myself before leaving London, that I would eat as healthily as possible, and drink hardly any alcohol – not easy when constantly on the move, and traveling with a load of Scots! As a result, a couple of the band members have taken to calling me ‘Mung Bean’ due to my healthy eating (I was the only person to order muesli for breakfast Friday!) and resistance to drinking alcohol.

I was very close to heading back to my hotel room when we left the venue in search of late entertainment, but after a little gentle persuasion, I agreed to visit the first bar with the group, but planned to lay off the booze. Despite temptation, I held out until ‘Sugar Children’ vocalist Sandy went to buy a round, heading to the bar with a request for a soda water & lime, and coming back with a Magners! It would’ve been rude to refuse, so I drunk it, naturally!

By the time we reached the next pub, the atmosphere was heading towards the merry side of jovial. I walked straight to the bar, to be be greeted by these words from Gordon: “Arron, if you don’t have a beer, I’m going to knock you out!” And so I did. He’s a lovely guy, Gogs, but he’s also 6’4″ and if he wants you to have a beer, you have a beer! That however, was my final drink, and about 12:45am I walked home alone in search of a bite to eat, ending up in my room with a 10″ pizza and BBC News 24. Perfect. I was fast asleep when my room mate Kenny fell in about 3 hours later, and from what I can tell, everyone had a good evening.

Over breakfast Friday, we were discussing a number of things including tartan (when in Rome…) I was reliably informed that there are certain stores in Edinburgh where you can walk in, give your surname, and be shown your family tartan. This intrigued me, as I wondered just how many types of tartan there could be, but it turns out that a great deal of British names are associated with a clan or district (normally by marriage, going back many generations) and that is how you get your tartan. So after finishing my muesli (which, I might add was delightful – no ‘food envy’ on my part!) I walked the short distance to the Royal Mile, and found a tartan store.

I started to explain my query to the very helpful assistant, and quick as a flash he whipped a book out, and said “there you go – find your name.” It was full of surnames in alphabetical order, and next to each name was a tartan. It turned out my family was associated with ‘Tara’ tartan – a very rare and unusual pattern. So rare in fact, that I couldn’t buy any, and the only Tara they had in store was a small 6″ x 6″ sample, so I took a quick photo and found out the name ‘Storey‘ is part of the ‘Murphy’ clan – before departing, a little wiser.

As I’ve said, day two was at Dundee, which is certainly the furthest North I’ve ever been, and I’m relieved we visited at the end of summer, as I can’t imagine how cold it will get up there in a few months! It appears fairly quiet for a city, but the venue, ‘Beat Generator Live’ (great name!) seemed cool, and was markedly larger and less grungey than Sneaky Pete’s the night before. The afternoon was a bit of a blur. There were five bands on the bill, which meant a lot of waiting around for only a short sound check, when all I wanted to do was go back to the hotel and lay in the bath. I’m so rock ‘n’ roll! There was a table of food laid on for the bands, and the huge tray of doughnuts was particularly difficult to resist. In fact I didn’t resist at all, and by the time I went onstage, I’d eaten three, and had a couple of beers. Goodbye abs!

We played much better than we did Thursday, and every member of the Sugar Children came offstage quite pumped, which was nice. I stayed and watched the headline act – Edinburgh School For The Deaf. They seem like good guys/girls, and I enjoyed what I saw of their show Thursday, and wanted to check all of their set last night. I was speaking to their drummer Jamie backstage before they went on, and he was kind enough to give me a copy of their album ‘New Youth Bible’ which I’m very much looking forward to listening to. I’ll certainly be returning the favour and sending him a copy of Streets Will Fold upon my return down south.

Right, better get off – last show tonight! I’ll link to some new photos, and start thinking about my next blog. Tonight’s venue is amazing so hopefully I’ll have plenty to write about tomorrow as well.
Take it easy