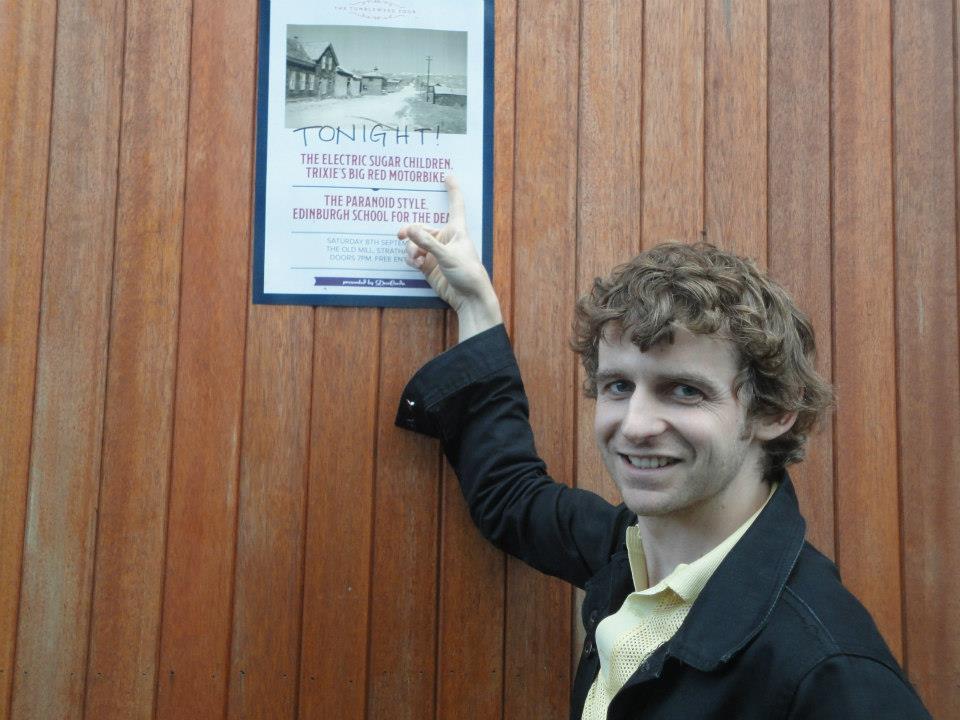 My Last Day as a Sugar Child…

Onto my final day as a Sugar Child! Day three and we found ourselves in a picturesque town called Strathaven, which the locals pronounce “Straven.”

The bus from Edinburgh to Dundee didn’t collect us until 2pm Friday, so I was expecting something similar when leaving Dundee Saturday. It transpired however, that the coach was scheduled to arrive at 10:30am, and I didn’t discover this until 9:30am, while still in bed with a dry mouth, and an overwhelming desire for at least another four hours sleep. Oh dear! After a quick shower and an even quicker sort through my bags and equipment, Kenny and I marched into Dundee town to find food.

After the mild excesses of the night before, I was in no position to undertake a two hour coach journey without some sort of nourishment, and thankfully found a small cafe which served me a black pudding roll. To my friends from overseas who don’t know what black pudding is, it’s a very British dish, and the foreigners who do know what it’s made of, generally don’t understand why we eat it! Kenny insisted I shouldn’t come all the way to Scotland and not enjoy a black pudding roll for breakfast, so I took his advice, and was glad I did. It certainly beat a McBreakfast any day!

Playing On The Bus

Most of the coach journey was spent listening to my iPod or practicing guitar. I’m playing a production of the Queen musical ‘We Will Rock You’ in November, and still have a lot of material to learn for that, (as well as the new Storey songs which we’re writing when we get chance) so spent the time productively. The journey itself was lovely – the Scottish countryside is notoriously beautiful, and I got a few photos out of the window.

We were in Strathaven before 1:30pm, and I was quite surprised at the venue. We played at a place called ‘The Mill’, and being close to Glasgow I was expecting something quite urban, much like the the two preceding nights. It turns out though, that ‘The Mill’ was actually, many years ago exactly that. It’s a large, old stone building, and (as you’d expect from a mill) is flanked by a cute river and waterfall. I felt like I’d stepped back in time, and after entering the building I saw nothing to change that perception – it was wonderful!

‘The Mill’ serves Strathaven as a theatre and arts centre as well as live music venue, and rather than the usual sticky floor, overlooked by a bar serving drinks in plastic cups, we were presented by a terrace of comfortable soft seats offering views of a high, wooden stage. I could imagine a young Edith Piaf singing there in the 1930’s! The stage itself was covered by an old rug, and a big, heavy red curtain, in front of which sat a grand piano. I couldn’t hide my excitement as we filtered in dropping off our bags and equipment, and soon started taking pictures and trying out the piano. At one point chief Sugar Child Gordon threatened to remove my “batteries” but after introducing myself to our sound engineer, Marshall, I continued exploring the building.

Downstairs are a number of rooms which functioned as a ‘green room’ – but unlike any green room I’ve used before, they are all filled with vintage equipment – old amps, acoustic and electric pianos, organs, even an ancient looking harpsichord. I felt like a child in a sweet shop as I opened one door to find a huge dusty mixing desk, which literally covered one side wall.

Once I’d settled down, I gingerly asked Marshall if there was wifi on the premises, and much to my surprise there was. In fact he’d even memorised the password (everything about Marshall was great – I can count on one hand the number of times I’ve encountered a sound engineer who is both courteous and knowledgeable; nothing was too much trouble, and our stage sound was fantastic). Within minutes, I was logged into my blog and uploading photos to Facebook.

Just as well there was wifi really, because the ‘Sugar Children’ headlined last night, which means you soundcheck first, and play last. Not always a problem, but on this occasion, sound check was at 2:30pm, and we didn’t play until 10:30pm. Eight hours is a LOT of time to kill when you’re playing in a quaint village in the middle of nowhere, and you can’t access your hotel!

Abbey Road or Let It Be?

Time did pass though – I started this blog, chatted to some of the other bands (after three days there were still people I was yet to speak to properly) and later seven of us took a walk into the town to find dinner. Marshall had recommended a pub called ‘The Buck’s Head’ so we found that and chilled out. As is often the case when you get a number of musicians sat around a table, the conversation inevitably turns to a heated exchange of opinion, and with Americans, Scots and a solitary righteous Englishman at the table there was no reason for this gathering to be any different!

Three of our party were Elizabeth and Tim (a married couple in their 30’s) and Bruce, 50, who between them comprise American trio ‘The Paranoid Style.’ When away from the band, Elizabeth and Tim are music journalists, and all three seem as knowledgeable as they are passionate about the acts they do and do not like. Within seconds of ‘Let It Be’ playing over the speaker system, we were deep into a discussion about our favourite Beatles albums – particularly which was the better out of their final two efforts, ‘Abbey Road’ and ‘Let It Be’… The was made all the more interesting by the American preference for ‘Let It Be’ and their subsequent horror at mine for ‘Abbey Road.’ Tim was particularly appalled when I referred to ‘Octopus’s Garden’ as “gorgeous” (with Bruce quipping “yeah, if you’re a 4-year old child!”) though we did find some common ground when I suggested The Beatles peaked creatively around ‘Rubber Soul.’

Things took another swift turn for the worse when I suggested Bob Dylan was “overrated” but generally there were constant smiles and laughter throughout the meal, and I enjoyed every second of it. Aside from the obvious enjoyment of being paid to do something you love, and being lucky enough to perform every night, I made some good friends this week. Although I spent more time with the guys from ‘The Paranoid Style’ and ‘The Electric Sugar Children,’ everyone on the tour was good company. It was refreshing to spend time with people who I felt compelled to listen to, and learnt off, yet who were just as interested in my thoughts and experiences. Although I’d quickly tire of living out of a hotel, and the constant travel, I’m also disappointed that the tour is over already and I may not see some of these people for a long while. If ever.

Final Show As A Sugar Child

My final show as a ‘Sugar Child’ was the best of the three. It was tight, and emotional. Lead singer Sandy was holding back the tears as he announced the final number in the set with “This is our last song tonight… and our last song ever” – and to be honest I was pretty choked myself. I was proud to be involved in something which meant so much to such good people, and I really bought into it over the course of the time I’ve been rehearsing and playing with them.

‘The Sugar Children’ have been playing together on and off for about 20 years, and it was coming to an end, so I was pleased for them when we got called on for an encore. Backstage afterwards, Elizabeth (who guested on keys all three nights) handed out grades, giving herself a very generous ‘A’ while I only managed a ‘B+’ – quite naturally I was outraged! 😉

Success As A Sugar Child

All in all I found being a Sugar Child a success, even if the planned final night out in Glasgow was a washout, due to the fact we got into town later than planned, and nowhere would let us in! Back to the hotel with a battered sausage, chips and curry sauce for me, but safe in the knowledge I’d probably saved myself at least £50 in beer money and the inevitable dehydrated train journey back to London today. In fact I’m sat here fresh as a button… (or is that a daisy….?)

I hope you’ve enjoyed reading these last few blogs as a Sugar Child even half as much as I’ve enjoyed living them out. Feel free to comment – especially if you wish to contribute to the ‘Abbey Road vs Let It Be’ debate!
Take it easy.

2 thoughts on “My Last Day as a Sugar Child…”