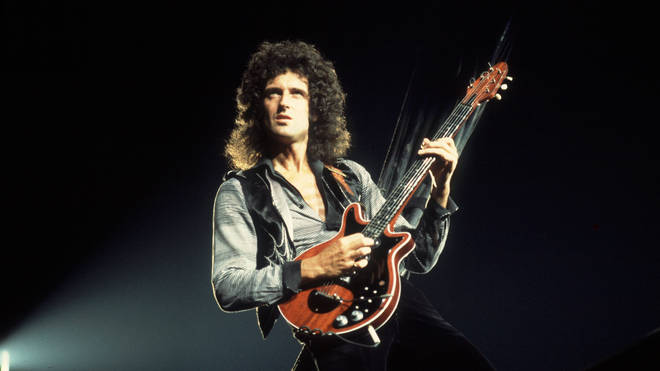 Before I get onto Brian May… This last week has been incredibly busy for me, which is good news! I was working in Toulouse with french pop/soul singer Kessy, with whom I’m co-writing an album as his lyricist. I’ve also been contributing production and composition for an exciting new project called ‘The Jam Station‘ – more of that on a later blog post! Anyway, as promised in my last blog, today is my last analysis of three important guitarists, as taken from the essays I wrote for Licentiate diploma for the London College of Music in 2014. Enjoy…

My final subject is Queen’s Brian May. He didn’t reach fame until later than Page and Hendrix, (citing them both as influences) and Queen’s self-titled debut album wasn’t released until 1973; by which time Led Zeppelin had released five albums and Hendrix was sadly dead. Regardless, May is an example of a true guitar hero whose sound and style is possibly even more recognisable than Page or Hendrix’s. This is due to a number of factors. Firstly, as a physics student, (who happened to have a carpenter father) he built his own guitar. Secondly he uses 8 gauge strings, (unusual in rock) and a filed sixpence for a plectrum meaning before he even plugged into his favoured Vox AC30 amp, he sounded significantly different from his peers.

Brian May is lauded for having a unique sound but I suggest using it in such a musically extraordinary way was his greatest achievement. May claims to have always been curious about harmony and this is apparent in the way he multi-layered his guitar parts in Queen’s music. An early example is Procession from their 1974 release Queen II, which sounds unlike any guitar track that had been recorded before. Both Hendrix (Fire – 1967) and Page (Ramble On – 1969) had recorded multi-tracked guitar solos and it wasn’t a new technique even then – in guitar circles Les Paul had been experimenting with the technique since the 1930s. However May took the concept to new levels; so much so that on each of the early Queen albums the band insisted on ‘NO SYNTHS’ being printed within the sleeve notes so people did not mistake May’s cutting-edge harmonised guitar parts with the early synthesisers of the time. By 1975 May was taking the skill to new heights of artistry and complexity, such as the solos of Killer Queen and Good Company. The latter featuring a replication of a full brass section, painstakingly composed and performed on the guitar. See below for arguably the most original and impressive guitar solo that I’ve ever heard!

Brian May The Guitarist

Aside from the abilities of composition and orchestration which he exhibited throughout Queen’s recorded and live career, Brian May was a skillful guitarist and Queen’s albums are littered with his memorable riffs and melodic solos; many of which are deceptively tricky to play! Despite being a fan of Queen for many years, playing ‘Guitar 1’ in a recent production of the musical ‘We Will Rock You’ gave me a whole new appreciation of how brilliant, thoughtful and surprisingly technical May’s parts were.

When teaching, I use riffs such as Ogre Battle, Stone Cold Crazy and a metronome to improve a student’s alternate picking skills. Bohemian Rhapsody contains a solo which is both melodic and expressive, (rapid legato, pre-bends, controlled vibrato and use of chord tones are all expertly executed, so great examples to teach an advanced student) and the outro riff – forever enshrined in popular modern culture by its use in the film Wayne’s World – is a great lesson in using broken 8th and quarter note triplets. This style is clearly heard in Knights of Cydonia by Muse – one of the many bands who showcase Queen’s influence in their output through layered harmony vocals and guitars, melodic riffs and operatic arrangements. (See video below)

Like Jimmy Page and Jimi Hendrix – the subjects of my previous two blog posts – I personally owe a debt of gratitude to Brian May for helping to shape my own musicality and there can be no greater compliment than that! To emphasise that point, here is a video of a recording I did for UK production company Special-Song.com, writing a Brian May style rock track, including a full on May-esque guitar solo!

If you’re interested in a quote for your own article (or guitar solo) then please drop me a line via the CONTACT page of this website. In the mean time you can stay up-to-date with my other ramblings via my Twitter page, @parolieranglais, INSTAGRAM and of course by subscribing to my YOUTUBE channel.