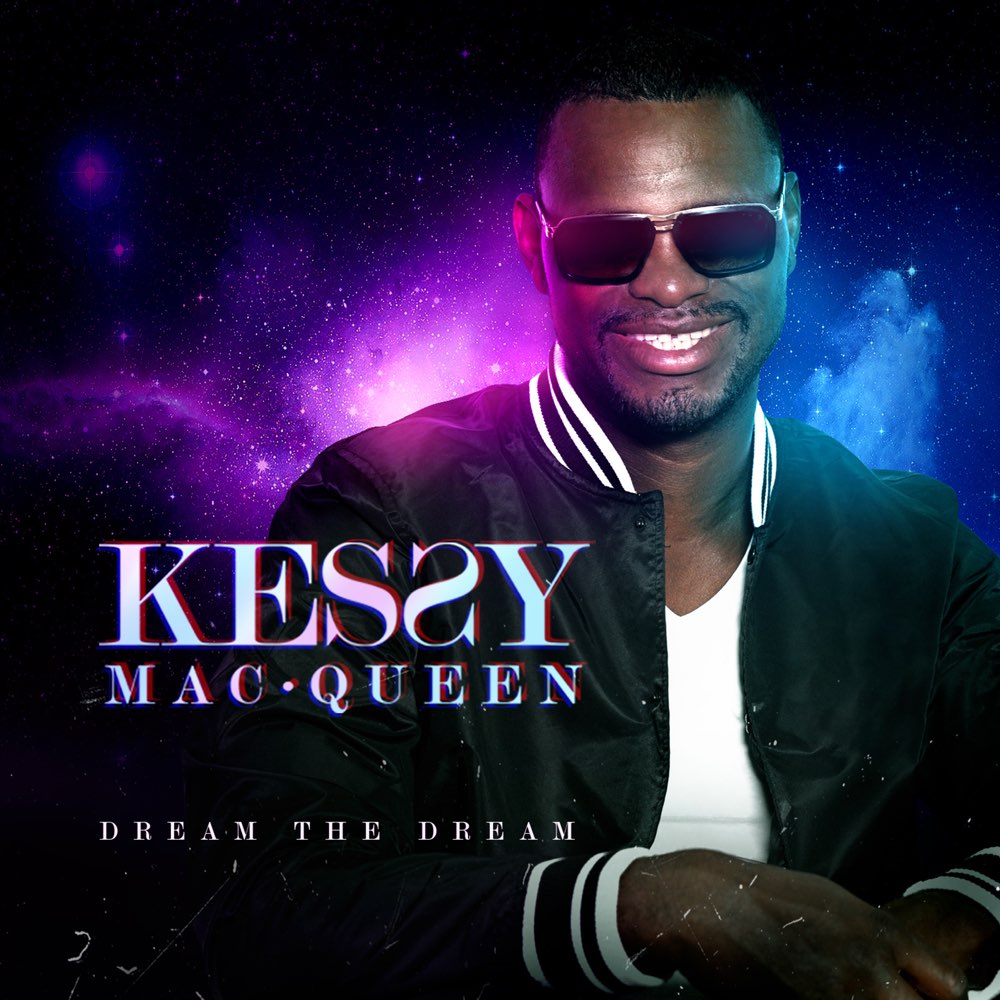 Dream the Dream – the superb debut album by French pop & soul artist Kessy Mac Queen was over two years in the making. It’s a rich and varied record and as it’s principal lyricist I’m immensely proud to have played such a big role in its production. Here is a little (unbiased) track-by-track review, including a few notes which readers, listeners and fans of Kessy will hopefully find interesting.

The Dream the Dream Team

Apart from the occasional additional collaborator, ‘Dream the Dream’ was an album largely created by a five-man team. The Executive Producer was El Hardoumi Driss of Sunrise Agency Records who oversaw the entire process. The instrumental side of things was mainly handled by Toulouse-based producer and beatmaker, Bachir Menmaghnia, aka Prodweiller who created the backing tracks. To these instrumentals, the melodies were added by Kessy Mac Queen himself and he would record what the french refer to as a ‘yahourt’ (essentially the melody sung phonetically using random words and sounds). This recording was then sent to me where I would write a set of lyrics – often to a pre-determined theme by Driss. Once complete, I’d record a demo vocal and send this back for Kessy to memorise. At this point we’d all try to meet in the recording studio (we used a variety of studios in France during the course of the album) to record the vocals where we’d exchange ideas in quite a cool and fluid process. As an english-speaker I’d also contribute as vocal coach at this point, to ensure Kessy’s english accent was as natural and authentic sounding as possible.
The final member of the team was Paris-based DJ and mix engineer Karim, better known as ‘Slee Beat’ who mixed the entire album brilliantly and also produced a few of the instrumentals which Bachir didn’t write.

Listen to Dream the Dream

While following this track-by-track guide, why not listen to the album via your favourite streaming platform – click here to listen via Spotify. I’ve also embedded the relevant music videos where they’re available.

Our Day
A wonderfully positive electronic pop song featuring the lovely Izis on backing vocals; this track was written from the perspective of Kessy as a blindman, to his then-partner, who had given him a lot of support. My favourite line from the song was “I can’t see what you see, but I feel what you feel” which really resonated with Kessy during the recording session. This song was also released as a single and featured a cool music video.

Wonderful World
This was the first song we produced as a team and in fact, when I wrote this lyric I didn’t even know who the artist was, and crucially hadn’t even heard Kessy’s amazing voice. Every song was easier to write after this because I was able to imagine the voice that would singing the words I was writing.
My favourite part of this song isn’t in a verse or chorus – it’s actually the uplifting spoken introduction which I wrote after the initial vocal recording session.

Just one man, to make a stand
To take a knee, for democracy
‘Cause together, we’re bigger, better, stronger
A force for good, for this beautiful world we live in

Think About You All The Time
A collaboration with a different French production house so a slightly different ‘R&B’ vibe to the other tracks, although it still fits in nicely. Here’s the video – simple but effective.

Live It Tonight
Live It Tonight was the final song we wrote and produced for Dream the Dream and easily one of my favourite lyrics and songs from the album! A mellow slice of pure pop with lovely, dreamy lyrics – a real summer tune. I imagined Kessy singing to a large festival crowd for the line “I feel your feet bouncing. I sense the wave and I obey” and that line still makes me smile to this day.

Bad Girl
A complete change of mood and a beautiful ballad, written about an ex-girlfriend of mine. I remember I was on tour in Italy when this melody was sent through to me; it touched me a great deal and I wrote the lyric while sat in my hotel room near Bergamo.

Round You
I was less sure of this song when we first recorded it. Kessy had a bit of a sore throat in the studio which made progress a little slow at first and I was also initially unsure about my lyric. However with time I can see what a strong song it is (it reminds me of 90s soul and Motown which is cool in itself!) and the line “I know the day that I broke your heart, was the moment my world fell apart” is not only one of my favourite lyrics on the album, but possibly one of the best lines I’ve ever written!

Time Angel
For a long time this was my favourite song on the album. An absolutely beautiful instrumental from Prodweiller, a melody which really evolves as the song progresses, and hopefully I produced a lyric worthy of the backdrop I was provided with. A song about how our love for someone can evolve, from those early hedonistic moments, through to staying alongside someone for a lifetime, regardless of the circumstances and challenges of the relationship.

Turn Up the Funk!

Magic
Another cool soul song which reminds me of latter day Luther Vandross – indeed I’d like to have heard the master sing this song! This was the only song we tried to produce in the studio together, largely at the same time. An interesting experiment (and I certainly can’t fault the results!) though we all agreed afterwards that it’s probably better when we all work separately and bring our work into the studio afterwards.
I’ll always remember the moment I wrote the chorus hook, scribbling “You make me feel all kinds of magic, a smile that takes me way up high” onto the page and then just looking at it with a big smile on my face – one of those real “Did I just write that?!” moments!

All I Wanna Do
One of the final songs produced for Dream the Dream – I actually wrote this lyric while back in the UK visiting my parents for a few days. A bit of a classic pop love song with some fantastic production and a few cool lines that roll off the tongue nicely.

“Desire I can’t contain, you’re like a drug, yeah yeah!”

Tell Me
This is a fun song with an infectious groove about trying to convince someone – maybe an ex – that they should sentimentally throw themselves back into the relationship, pack a bag and travel the world with you. This was perhaps influenced by the fact that I was touring around Italy at the time and getting into the spirit of moving around and living out of a suitcase! We had actually planned to call this song “All Around the World” but Kessy had already recorded a previous song with this name so it became Tell Me at the last minute!

The lyrics to tracks 11 and 12 – Get Down and Really Wanna – were actually written by writers who collaborated with the team and I must admit it’s refreshing to hear words and styles written by other artists, alongside my work as a lyricist. The album is richer for it.

Do You Remember?
This is the only time in my life I’ve been asked to write a song about life as a homeless person. A group with whom Kessy has a strong affinity. I did some reading around the subject and then set to write. The opening part of the song is a semi-rap style and I really enjoyed the challenge of writing in this way, which was quite new to me. I also love the contrast between the harder edged rapped part, with the melodic nature of the middle sections.

Embrace The Dark
This track is more of an EDM style and a bit of a clubbing anthem; I was training in San Remo at the beginning of my Italian tour when this song came through so I was researching the styles and themes in the evenings. Then my Nan died the day before I started to write the lyrics, so I made a little adjustment to include her name in the line “Call the girls, Eden, Edith, Joyce” in tribute to her which my Mum was very touched by! Here’s the video:

So Swagging
The final song and first single taken from the album was ‘So Swagging’ and I actually co-wrote these lyrics with my good friend and regular collaborator Jack Hardman. Not my usual style but it’s quite fresh and Kessy sounds great. I wasn’t sure this song should be on the album because it’s quite different from the other songs, but it’s quite a cool way to round off the album and as the single achieved over 500,000 views on YouTube it has clearly proved popular with a lot of Kessy’s fans.

If you enjoyed the album, you can buy a CD copy from Kessy’s website at kessymacqueen.com.

Thanks for reading this post about Dream the Dream. Please feel free to share or comment below and if you’re looking for a co-writer (a composer, lyricist or producer ) for your project then please drop me a line via the CONTACT page of this website. In the mean time you can stay up-to-date with my other ramblings via my Twitter or Instagram pages or stay up-to-date with new music by subscribing to my YOUTUBE channel.