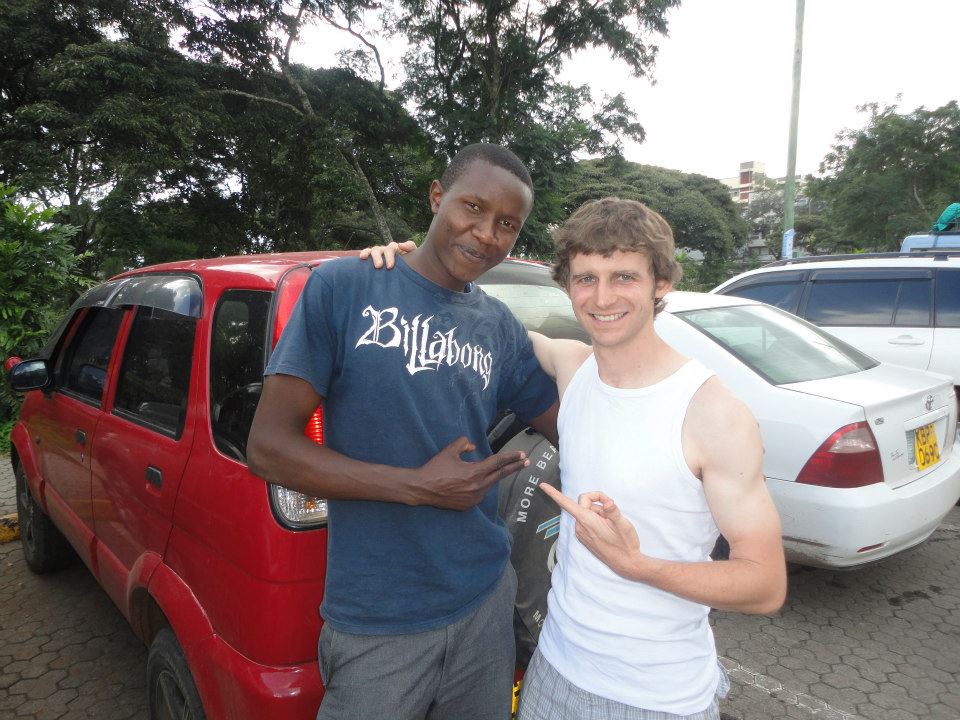 How to bus it across Kenya! My last blog was heavy going so I thought I’d change the mood a little with a light hearted look at the Kenyan roads and yesterday’s night bus trip from Nakuru to Mombasa – 360 miles of indifference…

Sleep On A Bus?

I traveled with a coach company which had been recommended, though I was advised to book either a 1st class, or the even more spacious ‘VIP’ ticket. However due to a combination of distraction and apathy I didn’t get round to booking my seat until the day of departure, and of course by that time, all of those had been taken. In fact there were just a handful of the cheapest seats remaining, at the very back of the bus. After viewing the available seats onscreen, I opted for the middle seat in the very back row, going with the logic I’d have more leg room, so more likely to fall asleep.

Fast forward 6 hours, and I was waiting for the coach to arrive, and very excited about traveling alone. As I walked the length of the bus, I could see a man was sat in my seat, and he appeared to be with his family. After doing a razor sharp analysis of the surrounding area, I could see a seat in the row in front was empty, AND had both a footrest and an overhead light. I felt like Adam Carter from ‘Spooks,’ making the most of a bad situation as I said “Habari” to the back row, and took the seat. However, this wasn’t my seat and the bus wasn’t yet full so every ounce of my being was willing the bus to start moving. And with a mixture of surprise and satisfaction, that’s exactly what it did. Bonus!

While stood waiting for the bus, a German missionary told me that despite the fact it was an 11 hour journey, there were no toilets onboard. Therefore I nipped into a nearby public loo for a quick jimmy (more rhymes, Haley) However, I needn’t have bothered as literally within 1km of departing, we stopped at a garage forecourt and the driver announced a 15 minute food and toilet stop. Only in Kenya! This is where the trip took a turn for the worst. Before moving off for a second time, a man came over with a ticket for my new ‘footrest & light’ enhanced seat… I’d have to take my booked seat on the back row… Almost as soon as I sat down in my booked seat, the guy to my right announced his intentions to enter the inaugural ‘Most frustrating bloke in East Africa’ award, when from his pocket came a ring tone so loud and shrill, it had to be the most annoying sound I’d ever heard… until that is, he answered the call and I heard his voice. Oh dear… I decided to read.

With no overhead light on the back row, and it being dark outside, I fumbled around in my bag for a torch. More Commando than Adam Carter now…I bought three books to Kenya – a music production textbook which I’m studying from for a forthcoming exam. I am yet to open this. The second is called ‘Buddhism Explained’ (drop me a note if you need further details of its content) and finally a book discussing the societal conditions which led to the Nazi party’s unlikely electoral victory in a small town in 1930’s Germany. Cheery stuff, but also fascinating. I was packing light for Mombasa so only wanted to take one, and the Nazi essay won the casting vote.

Navigating speed bumps is a common exercise for anyone who has driven in London – ‘sleeping policemen’ we call them. But in Kenya they’re neither painted nor sign posted so become more ‘policemen in camouflage.’ And rather than put them down quiet residential streets, they are placed randomly along high speed highways. Honestly. Locals know where they are, but volunteers like me, do not. And more crucially for the comfort of my 11 hour journey, nor did our driver. With the speed some Kenyans head down the highway, the bumps effectively become ‘tyre snipers’ and trying to read was impossible. In fact my torch and I were bouncing around so much, it must’ve looked like I’d assembled an impromptu disco at the back of the bus. After trying to read the same sentence for the 17th time, I gave up. Enter plan B – my iPod.

I nearly didn’t bring my iPod to Kenya, but I’m now very pleased I did. I flicked it into shuffle mode and sat back to be greeted by ‘Ce Matin La’ by French instrumentalists ‘Air.’ I’ve never tried to hide my love for all things which originate across the English Channel, but never before had anything French given me so much relief and pleasure! This was followed by not Storey, but ‘Private Investigations’ by ‘Dire Straits’ and as Mark Knopfler’s husky tones sang “What have you got? At the end of the day, what have you got?” I knew that after what I’d seen in the preceding days, I had nothing to be angry about. The third tune was Mozart’s stunning ‘Soave Sia Il Vento’ and by then, I was in cloud 9 – music had saved the day 🙂 Besides, only 10 more hours to Mombasa (90 minutes longer than it took me to fly from London to Nairobi, but without the trolley service from the cabin crew and with 100% turbulence thrown in for good measure).

At this point my thoughts turned to the journey home. Looking at their leg room, I really wanted a VIP ticket home. In fact I was so keen to avoid a repeat of the outbound journey, that I seriously considered spending my time in Mombasa training to obtain my Kenyan Public Service Vehicle licence, and driving home. It can’t be that hard to get… after all they’d given our driver – the love child of Stevie Wonder and Ayrton Senna – carte blanche to throw us around in the back of a bus.

Time ticked away as the music rolled across my ears, but there were regular reminders of what a serious error I’d made in choosing the middle seat of the back row. For a start as we drove along the highway at night, straight into the headlights of 1000’s of oncoming cars, I was pretty much the only person in the bus (aside from the driver, who was being paid) to receive each beam directly into the back of my retina. Everyone has seen a film where someone is captured, and tortured by having their eyelids taped open, and a bright light shone in. This was surely the closest anyone has ever come to that, without first being jumped on in the street, and thrown in the back of a van… AND paying for the privilege!

There were also times where I thought I may have inadvertently purchased a seat directly on the coach’s rear axle – particularly after the driver had to slam the brakes on especially hard to avoid running into the back of someone, and sending every passenger into the seat in front of them… except me of course, who didn’t have one! Time to buckle up. Let’s hope we don’t slam into one of Kenya’s many petrol tankers and catch on fire…

Nairobi – Not Even Half Way!

We eventually got to Nairobi – about a third of the way there – and although it was very late by this point, there was still traffic, and something was holding us up in the road. The driver pipped his horn a couple of times, although this was so measly and ridiculous I reckon ‘Herbie’ would’ve refused it on the grounds of it being too comical. After a few more novelty peeps, I was about to ask the bloke next to me to get his mobile out again, and sound off his ring tone. That was sure to clear anything within 100 yards, no hassle. Thankfully by this point, the driver opened his window and shouted some abuse across the street in Swahili. Now I’m no East African linguist, and I’m also reliably informed that most Kenyans don’t swear. But I think it was something along the lines of “Get out of the ******* way you bunch of…” I’ll leave the rest to your imagination. And we duly started moving again. Had I been wearing a hat, I’d have started a collection. But I wasn’t, and I was also unsure if he’d get us there without flipping the bus, or sending us over a ravine, so I held off.

Needless to say, tiredness took its toll, and I drifted in and out of sleep. At one point I stirred and realised I was sleeping with my iPod belting the ‘Red Hot Chili Peppers’ into my ears, so with a tinge of excitement, I whipped off my ear phones, zipped my iPod into my money belt and took a swig of water ready for some proper rest. In reality, this should’ve taken about 10 seconds. Trying to execute the above in the dark, while bouncing along a Kenyan highway into oncoming traffic meant it took longer. Considerably longer in fact. And by the time I’d finished I was no closer to sleep than if I’d just taken two shots of espresso, directly into each eye ball. Nice one.

Fast forward a few hours, and here I am. After arriving in Mombasa at about 6:30am we were greeted by endless streams of enthusiastic taxi drivers and I jumped into one with four other Nakuru volunteers who had managed to sleep their way through the above festivities in cosy VIP seats. We’re now residing in a nice poolside apartment, about 2 minutes from a sandy beach. They all seem cool (two English guys, an Australian girl and an Irish lass) and I’ll stay with them tonight (holiday, woo hoo!) before departing for the Good Life Orphanage, north of Mombasa tomorrow. I must ensure I book my return ticket though…