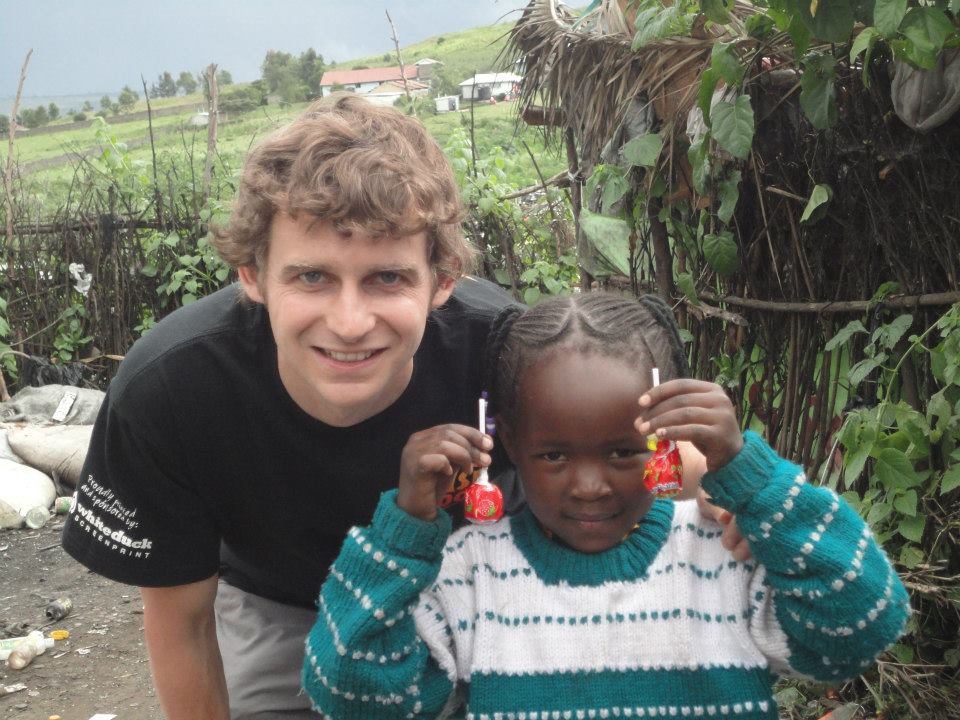 Kenyan Blog 3 – it gets harder…

I had planned to use today’s Kenyan blog to write about a couple of experiences I’ve had over the last few days – namely a very interesting Kenyan wedding, and a wonderful morning spent at a Nakuru primary school. However, what I’ve done today seems more pressing so… Today I went to visit a community, which over the last 10 years has built up on a landfill site – and is known locally as the ‘dump site.’ I’m sure I don’t need to explain where they live, but the circumstances which have led to it’s development are nearly as sad as the conditions they live in.

I went with Sean from ‘Raise the Roof’ and we drove out to pick up a Kenyan guy called Joseph, who is a former resident of the dump site, and was our ‘guide’ for the day; (it’s not recommended you go wandering onto the site without someone who is connected with the community). Joseph is one of the ‘lucky’ few who have managed to work their way off the site, although he still lives incredibly close to it, and has family on site. During the journey, Joseph (who is 30) was telling me that he currently works free of charge, for a local timber merchant. The work is hard, but he is hoping that if he impresses enough, then he will eventually get a fully paid job with them.

The day before the visit, Jospeh had to make contact with one of the community leaders, and gain permission for us to visit. We are allowed to enter their homes, and take pictures etc, on the condition that each visitor takes a bucket of supplies for a site family. Therefore the three of us drove down to Tusky’s, a local Kenyan supermarket, and Sean and I spent 1200 Kenyan shillings each (approximately £9.20) on sugar, maize, matches, rice and soap. We also shouted Joseph lunch as a thank you for his time.

From what I can gather, these visits are usually done in slightly larger groups, and Joseph was a little nervous about driving onto the site in only one car. Therefore he suggested we’d be more secure parking outside his house, and entering the site on foot. Even after a week in Nakuru, and passing a slum in Nairobi, I was shocked at the poverty in this area. The Kenyan roads were nothing more than rocky dirt tracks (I’ll post pictures on Facebook later today) and it was even heavy going in Sean’s 4×4 – and this was BEFORE we’d entered the landfill site. The streets were lined with children, who mainly smiled or waved, shouting “mzungu” or “how are you” (many young children in such parts do not speak English so they’re always full of pride when they’re able to say this to a white person). They love it when I reply with “Mzuri” which means ‘good’ in Swahili!

In the last seven days, I’ve encountered a few situations which have left me feeling a little nervous for my safety (whether justified or not, it’s the element of the unknown). Thankfully nothing untoward has ever happened. However, getting out of the car and walking around the area outside the dump was the first time I’ve felt genuinely anxious. This was clearly a very poor area indeed, and I felt Sean and I were attracting some unwanted attention, even though we were with Joseph. I really wanted the visit to be over as quickly as possible, and to get back to our apartment. I was also frustrated as I wanted to take pictures of my surroundings, yet didn’t dare get my camera out of my pocket. We stopped at a local shop to buy sweets for the site children, and then headed into the site. I breathed a sigh of relief, cautiously pulling my camera out of my pocket, although what I was about to see was a whole lot worse.

I felt I knew roughly what to expect before the visit – I’d seen images of celebrities standing by such sites for fund raising TV shows – seen the tears, and heard their descriptions. But it cannot prepare you for seeing it in real life. The first thing that hits you is the intense smell. It’s enough to make you question why you’re walking across the site – yet you’re also fully aware that people live here. The contrast between what you’re walking across, and what you can see in the distance, is striking. Kenya is a stunningly beautiful country, and the view in the distance was outstanding – bright sunshine beaming down on green hills and mountains. Yet if I looked 10 metres ahead, I could see endless piles of landfill, with both people and pigs sifting through the rubbish for something to eat or sell. It actually made my heart rate increase just seeing it. After a couple of minutes, we came to the community, and Joseph stopped to explain what will happen, and also a little about the history of the site.

The first house we visited (and when I say house, these structures are often no more than a mixture of corrugated iron panels, tied against beams of wood, with large banners and pieces of sheet or cloth hung down for limited insulation) was owned by one of the site elders, and to her credit, she’d made the house far more ‘homely’ on the inside, than it appeared from the outside. We sat down with two women in their 50s (who, I must admit, were surprisingly well dressed, although it turns out that they were wearing their best clothes as they’d been to church that morning. Sean assured me that if we’d gone tomorrow, they’d have looked quite different). It’s surprising that anyone who lived in such a settlement would hold any faith… We chatted for a while, though their English was limited (and my Swahili much worse) so Joseph and his friend Tony translated. The home owner, known locally as Mama Lucy, seemed nervous, yet grateful for our visit.

It turned out that she used to live in a home in Nakuru, but 12 years ago had been chased out of her home by her landlord, and the only place she could go was the landfill site. It must’ve seemed like the end of the world, as that’s where I felt I was, and I was only visiting, on a hot sunny day. I dread to think how a place like that would seem at night. Sean then asked how the government feel about their occupation of the site, and she said that they’d been served their notice by the government, as they wanted to extend the area of landfill. They’d been given no alternative place to stay, and Tony added that the government have no care where they go either. When we asked how long they had, she added that they had no idea – the bulldozers could arrive any time, and would just knock their houses down. Tony stated that when it does happen, he and Joseph as former residents will announce it on facebook, and there will be outside intervention. I wished I shared his optimism. After further chat we posed briefly for pictures, and when we got up to leave, Mama Lucy said “I only ask that you remember me. Don’t forget me.” I could’ve cried.

The second house we visited, was occupied by Joseph’s Grandmother, Dorcas, which she shared with another young family member who could’ve been no older than 8. I gave him a lollipop upon entry to the house and shook his hand, though he was surrounded by flies, and had an air of sadness about him. Unlike Dorcas, he didn’t really smile once during our visit. She was far more upbeat, and her English quite impressive. She made us all smile with her greeting of a hug and kiss on each cheek, and she seemed genuinely happy to see us. Tony added “Dorcas is full of life” which is humbling to say the least given her situation. We sat in her tiny living room/bedroom and spoke in a mixture of English and translated Swahili – If anything, her story was even sadder.

There is a history of Kenyan post-election violence – 1997, 2002 and 2007 all saw bloody clashes on the streets where people either died (often slaughtered with machetes) or were forced to leave their homes to escape such a fate. Dorcas was one such lady who had to leave her home of many years, and move to a dump site 3 hours drive away (though let me assure you she wouldn’t have driven) simply because of an election. I couldn’t believe she was smiling so much. I asked her if she knew anyone who died or got injured during the violence, and she said “many people.” With another election due for March 2013, some Kenyans are nervous about a repeat, although Tony was more optimistic that this won’t be the case. I sincerely hope he is right. Again, we took a few pictures, and as we got up to leave, Dorcas said she wanted to say a prayer, which she did in Swahili.

As she spoke, Tony translated, and despite the vast differences in our fortunes, I couldn’t believe Dorcas was praying for the health of Sean and I, and for God to bless our lives. Her final phrase was “may they never go without what they need in their pockets” which choked me, for reasons I don’t need to explain. I was only too conscious of the fact I had in my pocket a camera, a blackberry and about 4000 Kenyan shillings. I didn’t feel good about it either. How someone so unfortunate could be so generous with her faith and well wishes towards two strangers was astounding. We departed with another hug, and a heavy heart as I stopped to take a photo of her kitchen, at Tony’s request. He really hopes something good can come of our visit. Dorcas had prepared their dinner of ugali earlier in the day, and there were flies all over the small cooking pot and large wooden spoon which was leaning up against the side of the shack. I was only too pleased to present her with one of the two buckets of supplies that Sean and I had purchased earlier in the day.

On the way out of the site, we handed lollipops to the site children who had come over to say hello. They were in tattered clothes and old, ill fitting sandals yet the gorgeous smiles were a pleasure to behold; though it was another painful reminder that children so young and beautiful could be born into such poverty. I don’t mind saying that some of the children I teach could do with a dose of this reality when they come into my class room, look me in the eye and explain that they’ve not been able to bring their music because “I think my cleaner threw it in the bin.” I really hope I don’t get presented with that excuse when I get back to school in September… I can only hope that some of these Kenyan children will be sponsored in the near future, so they can move into a local children’s home, and sent to school. I’m going to look into doing it myself upon my return to England and if a few people back home are spurred to do something similar as a result of this blog and my time out here, then it will have been a success. And I warn you now I’ll also be undertaking a few sponsored activities over the coming months. Be ready!