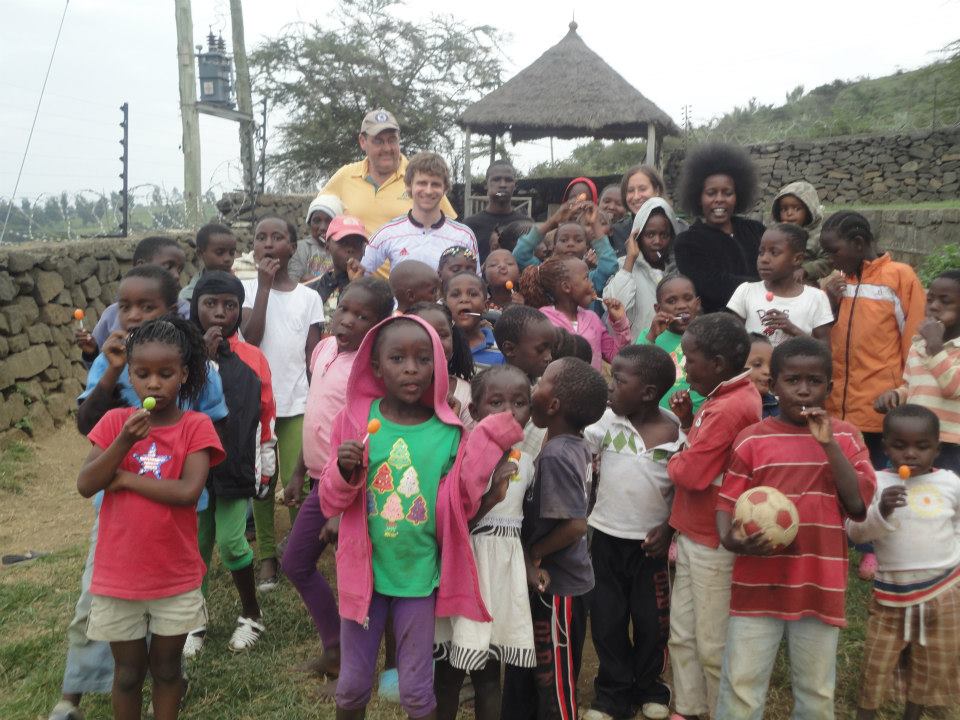 Two days on from my last adventure and I’ve still hardly stopped for air! In fact last night was probably the most chilled out yet, and my body needed it. Since I last wrote, I’ve re-visited a school to spend more time with the children, and performed at a wonderful orphanage, called ‘Springs of Hope‘ which is very fortunate to be funded by a church in America. Of all the places I’ve visited in Nakuru, this has to be the nicest environment to raise children.

From the outside it’s typical of many orphanages, schools and affluent homes in Kenya, in that it is a walled compound with some sort of security guard on the main gate. (Nearly everywhere employs a security guard – from gated communities, to bars and supermarkets – it would be unsafe not to, but more on this later). However, once inside ‘Springs of Hope’ I was greeted by an unusually large building, well kept gardens and a steep hill behind the orphanage leading up to a play area with a slide and swings – ‘luxuries’ that I’d yet to see in Nakuru – and the view from up there was breath-taking.

Although I’d never be insensitive enough to label any child in Kenya ‘blessed,’ these children were certainly luckier than most with their surroundings. Upon meeting and talking to the staff, who were all kind and warm, I was shown around the building and grounds which were populated by 40 young children who all wanted to say hello. Coming from somewhere as culturally diverse and cosmopolitan as London and the south of England, it’s amazing how unusual an experience meeting a white person can be to a young Kenyan. There are so very few of us ‘muzungus’ out here, it’s no wonder people stop and stare at you in the street, but to the children it’s a real event.

Everything about a white person seems to different to them, and it’s very cute as they explore your arms and hands, whilst practising their English on you. And they always giggle at each other when I try to talk back to them in Swahili! I’d taken my guitar along to play for them, but some of the older boys were kicking a football around, so the first thing I did was join in with them. Youth football in Kenya is rather more chaotic than I’m used to in England, but no less of an adventure! Principals such as passing and teamwork are largely ignored, and a bit of a free-for-all quickly ensued.

After exhausting myself doing that (I’ll put some pics on facebook asap) all 40 residents got involved, so fellow volunteers Sean, Dave and I organised some football and race based games, which you’d typically find in an English PE lesson. They all seemed to enjoy this novelty, and we split them into girls vs boys which added to the competitive fun.

While they had a food break (a cup of porridge) I set up my guitar on a step in the garden, and they all came and sat around my feet to listen. In fact it was lovely how close they wanted to get – I’m not sure they’d all seen a guitar before – and those at the front were so close that they could play with my shoe laces! Before I played anything, I asked them if they’d sing for me, and one of the carers counted them into a hymn which they sing in church. Considering they get no formal singing lessons, they sang like angels, and with no inhibitions – it was a gorgeous sound to listen to, and really bought a lump to my throat.

So much so, I asked them to sing me a second song. I played a few instrumental pieces, before singing a few as well (including some Storey!) – Dave, Sean and Haley (the other volunteers with me that day) all got involved as well, singing and suggesting songs and it was a really rewarding experience – hopefully for the children as much as us. It would appear that is was, as thankfully, we’ve been invited back to play again next week. Which leads me back full circle to last night.

Adventure with the Aussies…

We’ve been out for adventure every evening so far – meeting people, trying to catch up with the Olympics and even visiting a Kenyan BBQ. However, this takes it’s toll eventually so last night Sean, Dave (both Aussies) and I decided to stay in, get the guitars out and put a mini ‘set list’ together for our next trip to ‘Springs of Hope’. It was a good evening, although fear started to creep over me when Dave arrived and announced he’d worked out the chords to ‘Tie Me Kangaroo Down Sport’ and ‘Waltzing Matilda’ – I was just waiting for one of them to ask me if I knew how to play the theme tune to ‘Skippy the Kangaroo’ and I was going to run for the door, and take my chances with the Kenyan traffic (which is chaotic and dangerous to say the least!)

Thankfully it was fine and I’m now looking forward to doing it all again. The highlight of the ‘Springs of Hope’ afternoon had to be the children’s parting gift, which was a moving rendition of their ‘Goodbye Song’ which I assume they sing to all visitors. It was a real TV moment – the sort you see every year on ‘Comic Relief’ – and humbling to the extreme that these children would appear so grateful for my visit. When I departed, they were wearing the same tattered shoes and clothes as when I arrived. In that respect nothing changed – so really, it was me who should be grateful for being able to spend the afternoon with them. And for seeing all those pretty faces staring up at me while I was playing – attentively listening to every note – grateful I most certainly was.

I’ll finish with a funny adventure with the aforementioned security guards who pop up all over town and the surrounding countryside. I’ve noticed banks go even further and employ armed guards on the door. It’s difficult to imagine nipping down to your local branch of Natwest in the UK, to be greeted by two guys with automatic weapons, instead of the annoying woman who wants to know if you’re paying in “cash or cheque!”

Anyway, while running into a local hotel to meet someone in the week, I was abruptly halted by the two security guards for a pat down, and check of my bag. However, when I spread my arms ready for the pat down, they saw I was wearing my recently purchased Kenyan national football shirt – and they just started smiling, and saying “Yeah man, Kenya!” Then without a second thought, they just waved me through. As funny a moment as it was (and typical of the pride Kenyan’s feel seeing a ‘muzungu’ like me supporting their country) it’s also a little disconcerting that all it takes to walk straight through a security check point in an often dangerous place like Kenya, is to buy their national football shirt!