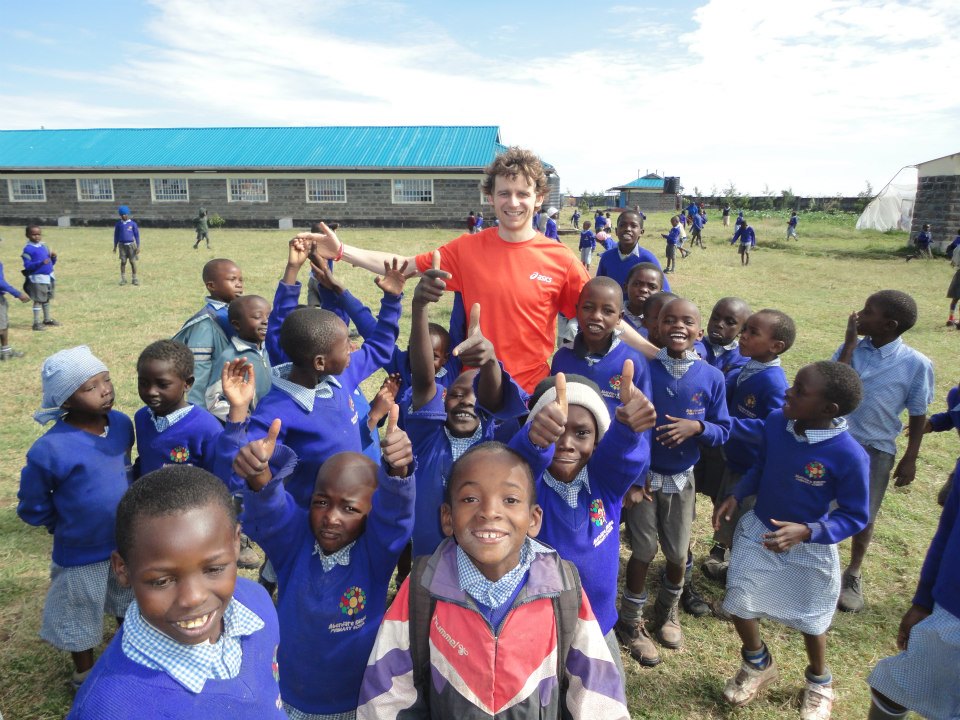 Four days into my Kenya trip, I’ve realised I’ll have to write a regular blog if I’m to have any hope of putting across what I’m up to. Facebook status updates don’t tell even half the story, and waiting ‘til I get back to the UK to write one giant ‘uber-blog’ is not really feasible either. If the next few weeks are to be anything like these first few days, it’ll be too long for anyone to even consider reading it, as there’s so much to do, see, and write about. This trip will almost certainly be very inspiring, lyrically, I can see that already.

Firstly, I’m having a wonderful time in Kenya. Now I didn’t arrange this trip to enjoy myself in the conventional holiday sense. Of course I wanted to visit a part of the world I hadn’t seen before – experience the people, culture, and learn a few things along the way – about their life, and mine. But ultimately I wanted to be able to help people who are less fortunate than me, even if in only a small way. Four days after landing in Nairobi, it’s safe to say I’ll be able to achieve all of those things.

I’m currently in a town called Nakuru, which is a 2-3 hour drive from Nairobi, and have been welcomed into the bustling local volunteer network – everyone has been so helpful and hospitable. I’m struck by the huge range of people out here though – my immediate circle of friends includes an Australian electrician (27), a Canadian medical student (20), an Australian farmer/scientist (40’s), and a generous spirited (if slightly crazy) 36 year old South African girl (and yes, Cindy, I know you’re probably reading this!) I don’t know what Cindy does when at home anymore, but whatever she does, she attacks it with vigour and a smile. It’s quite inspiring, and if it wasn’t for the encouragement of her and Sean (the sparky) I possibly wouldn’t have even made it out here.

There are other great folk as well – volunteers, and local people, who I just haven’t the space to talk about now. Despite the range of ages, nationalities and vocational backgrounds, everyone seems to share similar ideals and goals, and it’s great to see how they encourage and assist each other in their individual projects so willingly – nothing is too much trouble in Kenya – and for so little material gain. But that’s not what life is about out here, and it’s very humbling in so many ways.

I’ve already been fortunate enough to undertake an abundance of volunteer activities in Kenya, including visits to orphanages (both small and large), a remote primary school, and a trip to Lake Nakuru safari park with 10 beautiful Kenyan children. I’d love to tell stories from all, as they were all worthy experiences, but I’ll have to try including them in a future blog. I would however, like to briefly mention something which happened after the trip to the safari park. The 10 children were aged 6-12, from a Nakuru children’s home, and desperately poor. They were dressed in old clothes, and some are clearly not getting the love they need and deserve, when with their families.

But despite this, the display of huge smiles which greeted me as I jumped on the minibus that morning was enough to warm the coldest of hearts. They all wanted to shake my hand, stroke my hair, and sit on the lap of a volunteer. It was a lovely moment, and for some of them it was possibly the only chance they would ever get to visit the national park – even though it’s on their doorstep – as they simply can’t afford to go. Cindy’s charity ‘Start Small’ paid for them on this occasion and they were all very excited – probably nearly as much as I was! 😉

I won’t talk about the safari – as seems the norm in Kenya, everyone had a good time, and I was thrilled to get so close to giraffe, hippos, rhinos, zebras, baboons, flamingos and buffalo. But afterwards, we decided to take them for a glass of soda at Merica Hotel – probably the plushest, and most westernised of the hotels in the town centre. It’s beautifully decorated, serves nice food and drink, and has a lovely swimming pool out the back. It’s certainly not the sort of place the average Kenyan would visit too often, and definitely not children who are as unfortunate as these 10 babies. So we marched them straight through the reception, restaurant and sat them next to the pool, in the sun, while ordering 10 bottles of Fanta! Their faces were a picture as they took it all in – it was a million miles from their everyday surroundings. Considering the heat, and how little food and drink they normally get, I was astonished at how long they all took to drink their Fantas. They were laughing, joking, blowing bubbles through their straws, but clearly savouring every last drop.

Before they were driven back to the home, Cindy asked them to all use the toilet, as they’d not been all day. I offered to supervise, as nine of them were boys and she couldn’t just walk into a male public toilet. When I got in there, it was chaos; they were running in and out of the showers, turning the taps on and off and staring into the mirror. The biggest attraction of all though, was the queue for the solitary toilet – western style with a proper flush.

At first, I couldn’t understand why I couldn’t persuade any of them to use the urinals. But then I realised that they possibly never have access to such clean and hygienic facilities, and they all wanted to have a go at locking themselves into the cubicle, and flushing it after they had finished. Something I, as a westerner take for granted, and do countless times a day. It was very humbling. Some of them wanted to flush it BEFORE, as well as afterwards, and one of them waited until the flush had finished, just so he could do it again! As fun as it was for them, and nice for me to be a part of it with them, it was also a real ‘lump in the throat’ moment. I’ve never seen 9 boys so desperately keen to wash their little hands with soap either. They would scrub and scrub their hands, until they were coated in soap suds, rinse the bubbles off and then do it all again. It’s amazing that something as fundamental as washing your hands after using the toilet (something that not enough westerners do anyway) would bring so much comfort to a young Kenyan child. I just hope it’s not too long until they’re able to do it again…

Even with the generosity of the volunteers I’ve been lucky enough to meet and work with this week, the saddest thing is that there are still SO many children in Nakuru alone, who are beyond the reach of charities such as ‘Raise the Roof’ and ‘Start Small’, with the funding they have. They’ll never get to see a giraffe. They may never get to flush a toilet…