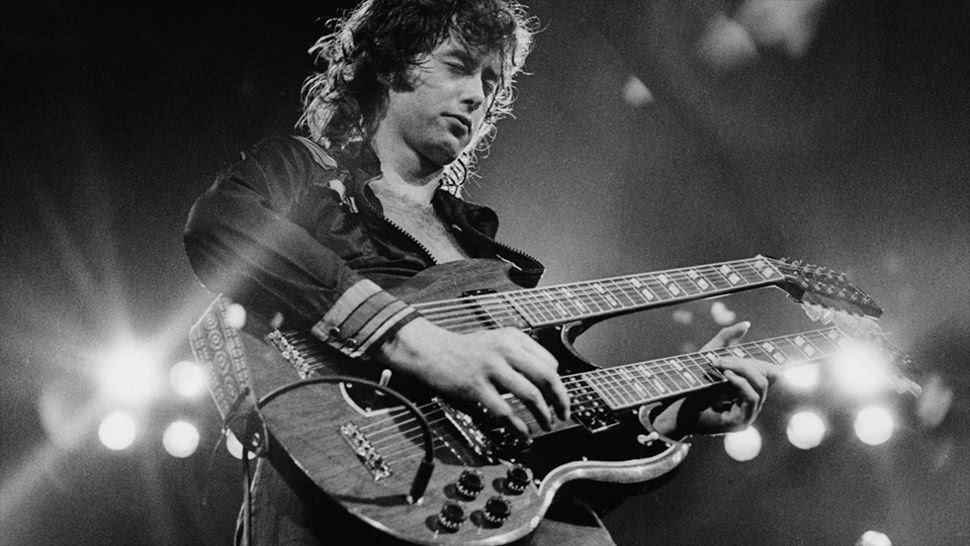 Jimmy Page… While recently searching some old work on a hard-drive I found an article that I wrote for my Licentiate Diploma with the London College of Music in 2014. This discussion and analysis of three of my favourite guitarists was very well received by the judging panel at the LCM and re-reading it five years on I was pretty pleased with the writing. Therefore I’m going to share it over three separate blog posts, starting with an analysis of perhaps the most influential guitarist in my career as a musician and guitarist – Jimmy Page.

This article was written from the perspective of how the different players’ playing styles contributed to the evolution of the guitar and especially how that has influenced me as a session guitarist and guitar teacher. Looking back, Jimmy Page has been just as influential on my development as a composer and a producer but that’s perhaps worth exploring in a future blog post. I’ve copied the article out word-for-word from the original document – I hope you find it interesting.

The first player I’ll discuss is Jimmy Page; most famously the guitarist in Led Zeppelin and The Yardbirds, but notable also as a session guitarist who performed on many hits during the 1960s and since Led Zeppelin’s 1980 demise. Jimmy Page is regarded as one of the most influential rock guitarists and although known primarily as an electric guitarist he is also a respected acoustic player and this ‘light and shade’ (mixture of heavy electric music with softer acoustic elements) was one of the features which separated Led Zeppelin from many of their contemporaries, including Deep Purple and Vanilla Fudge. A good example of this on their 1968 debut is Babe I’m Gonna Leave You, which moves effortlessly between finger-picked acoustic verses and riff-based electric choruses. Page’s early session career cannot be underestimated in its influence on his musical development. While he clearly had his own influences, (including Bert Jansch and James Burton) the thousands of recordings he played on during the 1960s exposed him to numerous composers, genres and scenarios which stretched him musically – and led to the versatility for which he is renowned. This is undoubtedly one of the main reasons Led Zeppelin are credited for bringing a range of styles such as Arabic (Kashmir), Reggae (D’yer Mak’er), Funk (Trampled Under Foot) and Samba (Fool In The Rain) into the pop/rock genre in such a credible way.

Although he has used a wide range of guitars and amplifiers during his live and recorded career, Page is most synonymous with a Gibson Les Paul Standard played through a Marshall amplifier – particularly during Led Zeppelin’s most successful period in the 1970s. This combination allowed him to develop the huge and often raunchy riff-based sound for which Led Zeppelin are best known, and for which he is most revered by guitarists, teachers and hard-rock fans alike. There are too many examples to list, though his most celebrated efforts – including Whole Lotta Love, Immigrant Song, and Dazed And Confused – remain among the most commonly requested songs that I, as a guitar teacher and professional performer, have ever encountered. Students enjoy them because they not only sound good, but they’re not hugely difficult to approximate with practice either; while even the most technically advanced guitarist cannot fail to be impressed by their sheer power, tone and groove. On many occasions I’ve taught a Page riff such as Black Dog to a student who is struggling to practice and it invariably increases their motivation knowing that they can, with a little effort, learn such a significant song. In fact it’s his ability to create riffs which are memorable, satisfying to play, but ultimately relatively simple motifs which puts Page into a very select band of guitarists; his music is a guitar teacher’s dream which you can introduce to students of any age or ability.

Page’s riff-based approach was undoubtedly one of the biggest influences on the development of the Heavy Metal genre. Steppenwolf may have coined the phrase in Born To Be Wild, but bands such as Led Zeppelin, Black Sabbath and Deep Purple set the blueprint of aggressive riffs, loud drums, fast tempi and extended guitar solos for the Metal acts who followed in subsequent decades. It’s impossible not to hear their influence on bands as far ranging as Iron Maiden and Guns ‘N’ Roses, through to more modern acts such as Q.O.T.S.A.

One area of his playing for which Page is not necessarily unique, but still considered a pioneer, is his soloing; particularly how he – along with the likes of Jeff Beck, Eric Clapton and Ritchie Blackmore – helped expand the accepted lead guitar vocabulary beyond its blues roots of the time. You could argue Chuck Berry and even T-Bone Walker had ‘rocked up’ the blues, and made the genre more exciting by crossing over into early Rock ‘n’ Roll, and although influential, even these players didn’t attain the technical heights that Page reached in the late 1960s and beyond. By today’s standards, Page’s lead guitar style seems, on the surface, fairly simple; but to be analysed fairly it should be considered within the historical context of the 1960s music scene. It would be unfair to suggest that other guitarists hadn’t recorded technical and original musical statements before Page. Rock Around The Clock (1955), Louie Louie (1964), All Day and All of the Night (1964) all feature innovative solos in their own right. But as well as introducing rapid, repetitive rock licks into his work, (listen to Led Zeppelin’s Heartbreaker (1969) for a solo which remains electrifying today, and which Steve Vai listed as one of his favourite solos) Page also extended the range of notes beyond the standard minor Pentatonic and Blues scales used by rock soloists at the time. As early as 1968 he mixed major and minor Pentatonic scales in Communication Breakdown, while he has also used the Dorian (Over the Hills and Far Away) and Aeolian (Since I’ve Been Loving You) modes throughout his career, introducing colours and sounds to the rock palette which had previously only been found in jazz. His solos remain memorable and popular choices with advanced students, and perhaps his most famous solo, Stairway To Heaven, acts as a perfect demonstration of how to build a compelling, melodic statement utilising many Page trademarks: recurrent phrasing to build tension, large controlled bends, and the combination of Pentatonic, Blues and Aeolian scales. It’s also a lesson to any student of the merits of learning and using all five CAGED shapes of a scale, as Page utilises the whole neck to procure different tones and licks from the guitar that would simply not be possible using the ubiquitous ‘shape 1’ alone.

Next week I’ll publish an analysis of Jimi Hendrix – another player who’s had an enormous influence on me as a composer and as a guitarist. Please drop me a line if you have any questions. To finish and just for fun, I’m posting a video of me and my brother Liam onstage in Miami, Florida back in 2010. We’d been playing with ‘Storey‘ that evening and after the gig a jam sprang up featuring some of the many talented musicians who performed that night. By 3am Liam and I had jumped up to perform an impromptu version of Led Zeppelin’s Black Dog – also featuring a couple of inebriated singers – loads of fun and we look so young!

If you’re interested in a quote for your own article (or guitar solo) then please drop me a line via the CONTACT page of this website. In the mean time you can stay up-to-date with my other music-environmental-language-fitness ramblings via my Twitter page, @parolieranglais, my INSTAGRAM and of course by subscribing to my YOUTUBE channel.

Thanks. Take it easy.
Arron