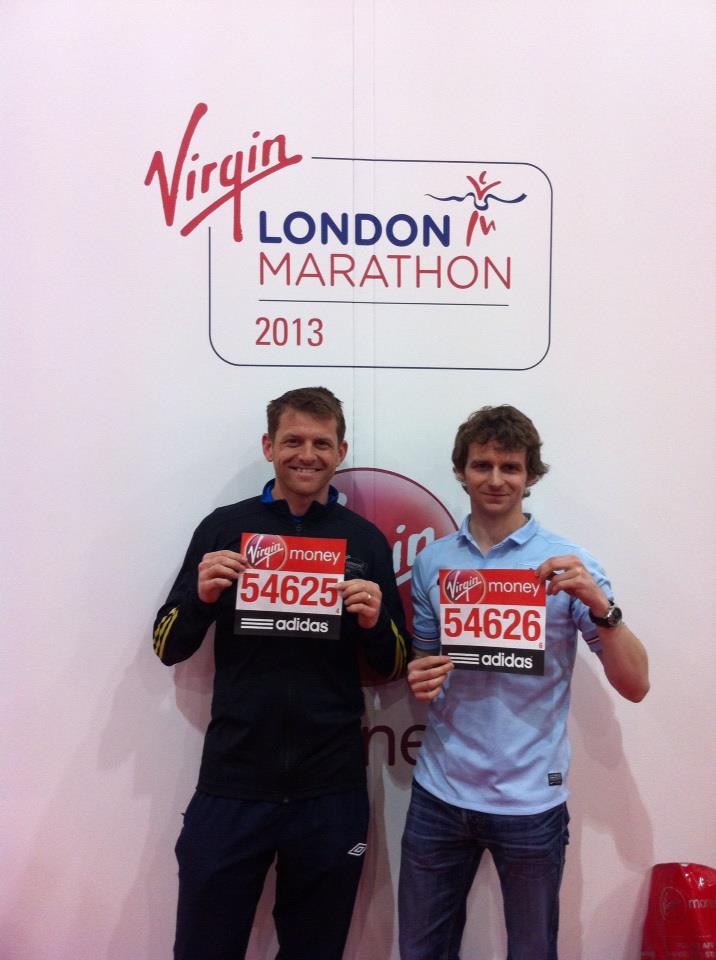 Yesterday I ran the London marathon – the second of the ‘two marathons in two weeks’ I had planned to raise money and awareness for two of the fantastic charities I worked with in Kenya last summer. And what a day. Wow. Although my time was not as fast as Paris (03:34:04, as opposed to 03:21:44) and I finished in quite a lot more pain this time round (understandable when I consider what I’d put my body through only 14 days previously!) the day was one I will never forget. Paris was quite an experience – it’s a beautiful and inspiring place – my favourite city in the world in fact. It was also my first marathon, and any excuse to go and practice my french speaking is gratefully received, so all-in-all, one to cherish. But London…

As a resident of London for 11 years, I felt I knew the city and it’s people pretty well. I had even grown quite cynical of certain aspects of London-life, by the time I made the decision to relocate to Berkshire in 2011. And despite the fact I’d heard it said many times that the London marathon is the finest marathon in the world, nothing could prepare me for the carnival atmosphere, and constant outpouring of support and encouragement, every inch of the way round. It was quite surreal and I don’t know how the other 38,000 runners felt, but at times, it was almost as if those 100’s of 1000’s of spectators were there solely for me, and to make sure I got round the course.

After the awful events in Boston only a week earlier, I was worried people would stay away. Keep their children away from the crowds in case of another terrorist plot, and the streets would be quiet – sombre even. But yesterday London and more importantly Londoners stood tall as an example of the feeling that can be created when enough good people come together and unite behind something. I’m running out of adjectives, but am still not quite sure I’m giving yesterday’s spectators justice!

Yesterday was very emotional. There were times when I wanted to stop (for the record, I didn’t!) and there was a brief moment between 20 – 21 miles when I started to cry. I remember that Coldplay’s ‘Life in Technicolour (ii)’ was playing on my iPod at the time, and that is a particular favourite of mine – but it was just the occasion itself that got to me. I was elated to be most of the way round a marathon on a glorious day, raising money for two charities I believe in so strongly. But also horrified that I had another 5-6 long miles to go!

I often get inspired by music (it’s my job and first love, after all) and very much did so in Paris. I didn’t stop listening to music all the way round. But in London, I felt like I was missing out on something being shut away from the crowd by my headphones. From about 8 miles, I was running with only one earphone, and from about 21 onwards, both of them were hanging down in front of me! When it got particularly hard, I found I was subconsciously running close to the crowd and feeding off their energy. It meant I could hear my name being called out – every passionate shout of “Go on Arron!” really helped drag me along. Music does a lot of things to me. It can make me smile and cry, it can even make me feel high. But yesterday it was very much second best. That’s one of the biggest compliments I can pay the London marathon spectators. In fact it’s not even the runners who make the event. The crowd is what makes the London marathon what it is.

It has left me feeling several things. Firstly, I will run other marathons and I certainly want to run London again. I want my brother Liam to experience that same feeling by running it too. But I also want to volunteer one year very soon. Whether it’s as a steward along the course, handing out water bottles or giving back bags to tired runners at the end. It would be my way of giving something back to the event and the people who helped me get round. If I don’t get a place running next year, I will do my best to be available to volunteer. I’ve no doubt I will be filled with envy, but at the same time just to be involved with the day will be an honour and a pleasure. The event couldn’t possibly exist without the many hundreds of volunteers who are there to help you throughout the 26 mile route and beyond, and after yesterday I owe it to the event to do the same. They were true heroes yesterday.

Right I don’t want this to sound like an Oscar speech, so I’m going to keep this as brief as possible. However, training for and running two marathons in two weeks was a big thing for me. I’m generally pretty fit but this has taken my fitness and mental strength to a whole new level, and there is NO WAY I’d have been able to get through the last few months without some serious help, assistance and encouragement from the following people. Here goes…. (and in no particular order) Thank you to….

Holly & Sean at ‘Raise the Roof,’ and Cindy & Bec at ‘Start Small.’ These are the guys who not only encouraged me to go out to Kenya in the first place (particularly Sean and Cindy who were so helpful before I left) but also gave me lots to do while out there, and have most importantly continued to support my training and efforts since I got back. The work they do in Kenya is amazing, and the video below which Holly posted on my wall yesterday morning was inspirational beyond belief!

The many people who have sponsored me, and sent messages of encouragement through text and Facebook. Some of you have regularly kept in touch, which has been great. Also the people who I may not have heard from for 10 years, but then pop up to sponsor me £10 and tell me how inspiring they find it – that means a lot too, thank you. The sponsorship is the main reason that I ran both the Paris and London marathon in a two-week period – I’ve topped £1000 already, but still have a long way to go to reach my target of £2000 each for both Start Small and Raise the Roof. Spread the word, and if you’ve not sponsored me yet, why not?!

My brother Liam and sister-in-law Megan – not only are they my best friends, but they came out to Paris just to surprise me and cheer me round. I cried like a baby, and seeing them walk over on Gare-du-Nord was as good a feeling as crossing the Paris finish line itself. I’ve no doubt it helped me round that course in the time it took me and hopefully the next 12 months will involve me helping them train for a marathon!

Last month’s UK/France travel buddy Haley – it would’ve been so easy to resort to a diet of late nights, fast food and beer, practically living in my car and on the road for 14 days. Thankfully Haley was there to make sure 6 months of training didn’t go down the toilet in the two weeks before my first marathon! We ran almost every day, continued to eat healthily and despite the fact we lived in each other’s pockets for 14 days non-stop, she kept me engaged and inspired the whole time. Brilliant!

My fellow London marathon runners – Adam Pugh, Stephen Eighteen, Ben Hartley, Lee Carey, David Hill, Nicola Brunton, Deebs Canning – all raising money for good causes, and going through the same stresses and anxieties as me for the last few months – but all have sponsored me, and lent the occasional word of encouragement which has been really appreciated. Not forgetting Jo Garden who is running her first marathon in 6 days time, and has all of this pain/pleasure to come! Superstars. But most of all, John Gardonyi who ran Paris with me. Training together (or more specifically, talking about it) speaking fr-anglais, and sharing something like a marathon in Paris is amazing. And he did it all at 49 years old. Without any training or diet! What a guy.

My friends, and family of elite runners Dan Watts, Glen Watts and Stu Wadlow. Dan for getting me the place on the London marathon in the first place (not to mention 50% discount on a wicked London marathon tracksuit!) and Glen and Stu for their help and words of advice over the last few months. Cheers guys.

Martin Dawson at NWCC in March worked above and beyond the call of duty to organise a 3km run at my old school for staff and students. Unfortunately it fell on the coldest day of the year(!) but was still lots of fun and raised good money, and Ryan and I owe you a beer or two.

Sarah Cliss and Margaret Marson for encouragement and press release writing/sending/reporting. All coverage of such good causes has been appreciated, thank you.

Ryan’s friend and running coach Whitey has been instrumental in getting us both up to speed with fitness and general London marathon related advice. Cheers matey!

My best friend of the last 26+ years, Ryan Lemmon. Despite the jokes surrounding ‘who would beat who’ yesterday (and I won’t say who had the quickest time, as I don’t want to embarrass him!) Ryan has been more of a help than anyone over the last few months in keeping me motivated, passing on his training tips and making sure that I was ready for both marathons. When I was down because my knee was sore, it was him I called and he always listened and reassured me. Not easy when you’re going through the same training and concerns yourself. We’ve done training runs, 5ks and half marathons together this year, and it was fitting that we crossed the line together yesterday in London. His knowledge and fitness are second to none, and I undoubtedly benefited from that. Thanks mate. You owe me… 😉

My parents Dave and Val Storey are there every step of the way. They have been for 31 years, and I know they will be long into the future. Not just with this Paris & London marathon saga (though naturally they were there cheering me on in both Paris and London, handing me bananas at strategic points, and getting lost at the finish line!) but with all areas of my life and career. It’s so reassuring knowing even now, they’re there to do anything for me if I needed it. I love you guys 🙂 x

Right, that’s enough mush. I’m off to make a smoothie out of concrete and rusty nails. I have the Marlow half marathon in two weeks (I’m not even joking!) so need to get over this insane soreness pretty quickly. PLEASE if you’ve not yet sponsored me, consider doing so. Start Small and Raise the Roof are such great charities and the children they help are so heartbreakingly poor but loving. Even if it’s just a couple of pounds…It all adds up, and you won’t do a better thing all day 🙂